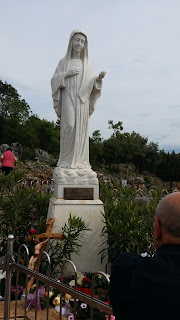 It’s easy to dismiss the idea of a supernatural event occurring in the real world in the twenty-first century, whether it be recently deceased Aunt Molly appearing at your beside in the middle of the night or some witch-like psychic telling us she’s in touch with people on the Other Side. Or the Blessed Virgin Mary regularly appearing to six people in Bosnia and Hercegovina for some thirty-five years.

These events defy common sense, our intelligence, our knowledge of how the universe works. Right? Or could it be possible there’s something in it after all?

Here’s what St. Augustine had to say about miracles: “Miracles are not contrary to nature, but only contrary to what we know about nature.” And this, from G. K. Chesterton: “The most incredible thing about miracles is that they happen.”

Those taking a closer look at this blog will note that in April/May 2016, I travelled to Medjugorje in Bosnia and Hercegovina to get the feel of the place myself. Before I go further I declare my bias: I do believe in miracles because, to my mind at least, I’ve been on the receiving end of one, though not associated with Medjugorje.

For anyone who stumbles upon this blog and doesn’t know the first thing about Medjugorje, there’s a potted history entered on 29 April 2016.

Over 500 books have been written on the phenomenon. Added to that, there are countless websites and YouTube videos. The Church is deeply divided and the long awaited decision of the Vatican’s  Congregation for the Propagation of the Faith which investigates these phenomena is yet to materialise.

Given the Church’s history of taking things slowly — sometimes centuries — I prefer to know things now, not posthumously. So I thought I’d gather what material I could find on alleged miracles associated with Medjugorje and see what I could make of it all.

On the pages that follow, I propose taking one event at a time, researching it as best I can and recording the testimony of those who say they've been on the receiving end of a miracle associated with Medjugorje or those who have written articles about such people. Whether, in each case, we are talking about a miracle I will leave to the reader.

Please bear in mind that I will try to keep the testimony or articles as near as possible to the original and most of this material is not written how I would normally write or talk.

My view is, for what it’s worth, that given the sheer number of events, it would be a miracle if at least some of them weren’t miracles.

For those who say the whole thing is an elaborate hoax, here are a few questions for you:

Regarding the lack of destruction of Medjugorje during the Bosnian War this is what visionary Mirjana, living there at the time, has to say in her autobiography My Heart Will Triumph:

But even though Medjugorje was surrounded by war, it seemed like we were in a protective bubble. Missiles and mortar shells were launched into the village but they only landed in the fields. According to a Serbian (i.e. enemy at the time) newspaper, Yugoslav warplanes sent to destroy Medjugorje could not drop their bombs because a "strange silver fog" developed over their target.

These questions relate to just a handful of unusual events and are by no means exhaustive. If anyone can provide a rational explanation perhaps I will be moved to change my view. Until then I remain convinced — Medjugorje is a place of miracles.

We must keep in mind that there will be some who will classify almost anything that happens to them as a miracle, such is the level of their enthusiasm. There may also be some of the events described in the following pages that, upon a more detailed investigation, have a perfectly rational explanation. But given the volume and intensity of these occurrences, even if only ten per cent are inexplicable what are we to make of those?

You be the judge.