As promised yesterday I said I'd write something about my excursion to Dubrovnik, Croatia. Sometimes around Medjugorje you see people carrying a flag with all these other people dutifully following behind, somewhat like sheep. While there are many guided tours to Dubrovnik, I couldn't cope with something like that. So, I asked Tomo, the driver who's doing my airport runs, to quote and he was quite reasonable. It was just the two of us; no flags, no sheep. To go the "normal" way to Dubrovnik from Medjugorje, that is via proper roads and even a motorway for part of the trip, you have to cross the border three times, such is the way the two countries abut. A few days earlier Tomo had taken that route and was held up at one of the border patrols for two hours, so he decided to take me the alternative way. It was through very mountainous country on a very narrow road a bit like a goat track. But hey, just one border to cross.

Of course we were well under way before Tomo told me he had to do an airport run at 2am that morning and had only managed three hours' sleep. Oh yes and he likes to use his smart phone a lot while he's driving. Want to know something? "Nema problema, I just look up."

But I do actually like him. He's a giant of a man, built like the proverbial brick dunny and he was a soldier fighting the Serbs during the Bosnian War. He tells me that when war broke out he was living and working in Germany and as everyone was leaving Bosnia and Herzegovina he decided to do the opposite; he returned to fight the Serbs. Very interesting character.

Anyway, believe it or not we made it to Dubrovnik. This is yours truly, posing. Note the interesting bridge in the background and the cruise ships which come and go like taxis and disgorge their passengers straight into the Old City. Unfortunately the prices there reflect the nature of the clientele. 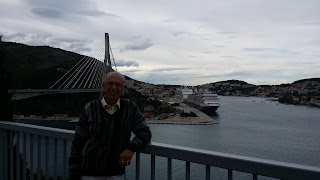 Dubrovnik is on the Adriatic Sea and is encircled by massive 16th century stone walls. This kind of thing: 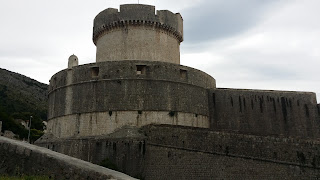 Although designated a city the permanent population is less than 50,000 but it is a UNESCO world heritage site and regarded as being among the ten best preserved medieval cities in the world. 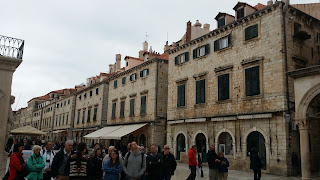 The main street to me felt very Italian (and here I was thinking I was escaping from them). Think Venice or Florence. Take away the throngs of tourists and it's all rather grand. 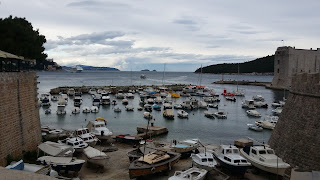 Anyway I won't bore you with too many photos but I did go rather crazy with the camera. It's one of those places.

Although demilitarised in the 1970s to protect it from war, after the breakup of Yugoslavia in 1991 Dubrovnik was besieged by Serb and Montenegrin soldiers of the JNA (Yugoslav People's Army) and for seven months suffered a significant amount of shelling.

Tomo decided to take us back on the good road and risk the number of border patrols. En route we were treated to this Croatian sunset: 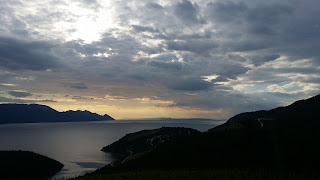 It was indeed a beautiful trip home because the road follows the coast for much of the way and there are islands just off it. It helped too that the sea was dead calm.

And Tomo didn't fall asleep once.

So, on to today. I decided, by hook or by crook, that I was going to scale Krizevac (Cross Mountain). For someone uncomfortable at heights that's quite a challenge, especially as the "path" looks like this: 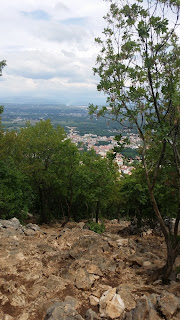 To most, a "mountain" of 520 metres wouldn't be too much bother but for me, it was 520,000 millimetres which was akin to climbing Mt Everest. Of course that is the height, not the length of the "path". According to my fitbit I walked a total of 18.2km today and a lot of that was up and down mountains.

I haven't made a study of it, but it seems to me that millions of years ago there must have been a lot of lava flowing down Krizevac which has resulted in all these rocks. You really do need to be a mountain goat to negotiate them. How these old ladies with walking sticks do it is beyond me. Actually one did fall on me before I'd barely got started but we both survived.

It is called Cross Mountain because the local parish priest decided in the 1930s to erect a giant cross at the top of the mountain to commemorate the 1900th anniversary of Christ's death. All very well but remember the rocks. So his parishioners carried the materials, cement, sand, water, tools and so on one unsteady rock at a time up to the top and built his cross for him. It was completed on 15 March 1934.

Anyway I made it, actually astounding myself and here's the proof: 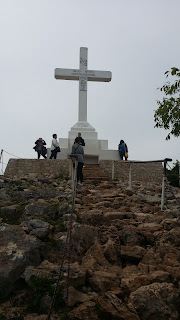 Those guard rails you see in the foreground are just for the last ten metres or so. The rest is entirely rocky with nothing to hang on to except the occasional tree. Tomo tells me there are loads of snakes too, very poisonous but not to worry because if you get bitten "you just go to hospital and they give you anti-venom and you be okay in few days."

The view from the top of course is incredible. Not that I contemplated it for too long.

Not having enough mountain climbing under my belt, I walked all the way back to the hotel (a couple of kilometres) then a couple more kilometres in the other direction to Apparition Hill which I scaled for the second time since I've been here.