Today's blog will be shorter than usual. Firstly because I spent most of yesterday indoors, secondly because I will soon be off to Dubrovnik in Croatia. Expect comments on that journey on Day Eight.

A video of yesterday's apparition by Marjana is now available on YouTube for anyone interested. I did in fact download it and tried to upload it to this blog but apparently I have a 100mb limit and it turns out it is 148mb so no joy there. However if you simply go to YouTube and enter "Marjana/Apparition/2nd May 2016" or something similar it will pop up. The title is in Italian but you should still recognise the right one. There are of course hundreds of them because even if you just limit yourself to Marjana's apparitions, they occur every month.

A couple of shots taken this morning: 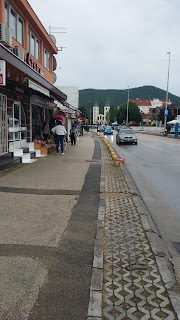 This one is of the main street of Medjugorje with the church at the far end. The mountain behind is called Krizevac (or Cross Mountain). There is a cross erected at the top. You can't see it in this picture but it is on the higher of the two 'camel humps' you see beyond the church. I'll talk more about that in a later blog. 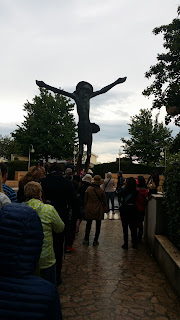 During Easter 1998 this bronze statue was erected. It is the creation of Slovenian sculptor Andrej Ajdic.  The reason for the queue you may ask? Sometimes it takes people at the end of the queue two hours to reach the statute. Just after it was first erected it starting weeping liquid from one knee, then some years later it started weeping from both legs. No-one seems to know why or what the liquid is. It may just be water; perhaps it was built over a spring. But it appears it has not been plumbed that way, it just happens. Just another mystery to add to the phenomena here.

By the way, I came across an article in the Daily Mail online which explains a bit more about Medjugorje. Here's the link: