Sunday. I went on a very, very long walk today around Medjugorje and stumbled upon the Cenacolo Community grounds.  This organisation was founded by an Italian nun, Sister Elvira Petrozzi to care for young people blighted by drugs, alcoholism and despair. Now these communities are found in various parts of the world.  This is the front entrance to that very peaceful place and beneath that a plaque nearby showing Sister Elvira. 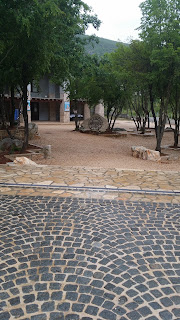 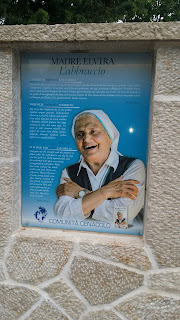 There is an excellent documentary about Medjugorje on DVD called "The Triumph" which features an American, "Ben" who at 28 was out of control on drugs and alcohol.  He ended up here. I believe he is still here many years later because the makers of that documentary have made another one and I've seen him in the trailer. His is an incredible story.

Mass for English speakers today was held in a hall in the grounds of St James Church because of Masses in other languages being held in the main church building. Between the main building and the hall Masses are virtually back to back all day, an incredible sight. Not only that, each one seems to be packed to the rafters. This shot is from towards the front where I was. Note the number of priests celebrating the service. Thirteen! This, at a time of dwindling numbers of priests. This is where they all got to! And before ours could start we had to wait for the French entourage to finish theirs and move off. The service itself was quite moving. The music was beautiful, the sermon one of the best I've ever heard (by an Indian Englishman) with just the right amount of humour and certainly said with both feet planted firmly on the ground.  I turned around at one stage and couldn't believe the number of people there. I'd guess at least a thousand. What was equally incredible was the fact that there are that many English speakers here. All I hear apart from the local Croatian language is Italian. There are literally dozens of coach loads coming in. I have nothing against Italians and in fact like them a lot but when that is the only language you hear all the time it is a little overwhelming. And as you know they don't do whispering. 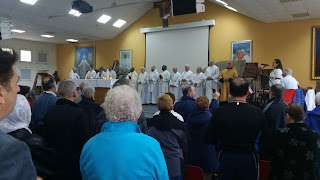 Oh and just in case it's a really special occasion here's how they accommodate them: 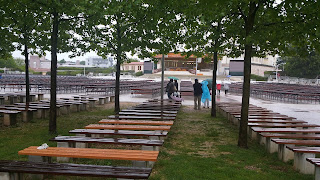 Rows of seats as far as the eye can see and right over in the background is where the priests would be. That is actually the rear of the church, the one with the twin towers a photo of which is in my earlier blog.

The priest saying Mass said that one of the visionaries, Jakov, is hosting a concert in this same hall tonight at 9:00pm to raise money for a charity. I'm not sure what sort of concert it will be (unlikely to be a Rolling Stones gig I'd say) but I'll probably go along and at least see him. When the apparitions started Jakov was only 10. His father abandoned him and when he was 12 his mother died, leaving him to live with his uncle. Now he is 45. I am promised yet again that there'll be an interpreter. This is nothing to do with apparitions; he's just there to raise money for the charity.

Marjana's apparition is at 8:30am in the morning. The priest said to be prepared to be kicked and shoved because there'll be thousands there (and you know what Italians are like when they're trying to form an orderly queue). In yesterday's blog I talked about Apparition Hill and there are some photos.  The one showing the blue cross is where this takes place.

And if you're really, REALLY keen, another visionary, Ivan, has his at the white statue of Mary (see photo in yesterday's blog) which is quite a way further up Apparition Hill. And this is at ten o'clock tomorrow night. So, remember what I said about the rocks. There is no pathway. It's all rocks. It's slippery. It's been raining all day today. There is no lighting. I reckon it would take about an hour in those circumstances to get there and again there will be thousands of people falling over each other. I doubt I'll be chancing that one.

Just another interesting fact about all of this. Medjugorje is in the diocese of Mostar. Neither the current bishop of Mostar, Ratko Peric nor his predecessor Pavao Zanic, accept the visionaries or the apparitions and the Vatican is yet to rule one way or the other. People just make up their own minds and come anyway and that includes thousands of priests. There are shops here that just cater to them, selling vestments and the like. And, of course, they're everywhere. Tomo told me that the current bishop is not well liked, that during the Communist era he was a collaborator. I don't know if that's true; I just pass on what he told me. But I do know from what I've read that he is no friend of Medjugorje.

In the very slight chance you're getting bored with reading about the religious side of this journey, I'll mention something extremely exciting: what I've been eating and drinking. There are no really fantastic restaurants here and of course no night clubs, pole dancers, strippers, dodgy massage parlours...Funny that. (And I still haven't succumbed to boredom). But there are some good basic places to eat. I've been eating at my hotel because they do pretty good food at a reasonable cost. And of course it saves wandering aimlessly around the streets. I do enough of that on my long walks. I've mainly been drinking the local beer which has an unpronounceable name but is excellent and local wine. The wine is really local, i.e. from Medjugorje itself; you see vines all around the place. No large wineries such as Alan and I visited in Uruguay but the white I've been drinking is exceptionally good. Or at least it seems like that to me, admittedly a Philistine when it comes to wine. And last night I had the best pizza I've ever had. This hotel caters mainly to Italians so they'd want to do decent Italian food or they wouldn't keep their clientele very long.

Stay tuned.
Posted by Darryl Greer at 8:04 AM