As I mentioned previously, last night we went to see a show called La Bicicleta Blanca at Teatro Solis. This theatre is very near to our hotel, and stands beside the Citadel gate where the city centre dies and the Old City begins. It is at one end of the Plaza de la Independence.  It is said to be the foremost theatre and opera house in Uruguay, reopened in 2005 after undergoing a process of restoration lasting several years.

The show was to a packed house and the singers, musicians and dancers received a lengthy standing ovation at its conclusion. It was interesting for me in particular as I had little knowledge of the music behind the tango and the best of the best were performing it.

If there was a downside it was that it was (for me) freezing outside and overheated inside. Here I was wearing a jumper. (I had scoffed at Alan wearing a colourful, almost Hawaiian shirt with nothing over it). So it was with a little relief when the curtain came down and I could once again return to the frozen exterior.

The interior of the theatre was amazing. It was almost like a smaller version of London's Royal Albert Hall.

Today we took it easy. We went to the Holocaust Memorial on La Rambla, a lengthy esplanade fronting the River Plate where there is a section dedicated to the Jewish community lost to the Holocaust. 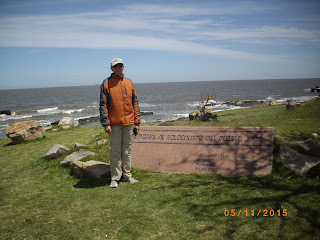 This is yours truly standing by a small section of the memorial with the River Plate in the background.

We then walked back along La Rambla and eventually took a taxi to where we had lunch and for the first time since I arrived, I had the national dish, the chivito. It's a bit like a hamburger with steak, egg, salad, basically 'the works'. With fries, of course. 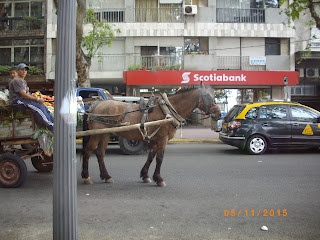 While we were there I took the above shot through the cafe window. You see a lot of horse and carts here.

During the day we also stumbled across the changing of the guards just outside our hotel. (Not quite like the London version!) 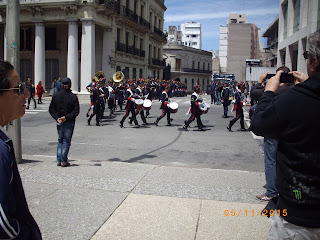 We're off to a highly recommended restaurant tonight then tomorrow morning we check out, take a car to the airport and collect our hire car for the drive to our next stop, Punta del Diablo. I'm not sure about the quality of the wi fi there so I'll catch up with this blog as soon as I can.
Posted by Darryl Greer at 12:15 PM