Taxis. In Buenos Aires they're those little yellow and black thingys which are quite distinctive and are all over the place.

Except when it rains. Then they are extinct rather than distinctive. With a booking for Steaks by Luis at 8:45pm last night we thought we'd venture out and find a taxi at about 8:15pm. Plenty of time to get to our destination. But alas, no taxis. Not one. But with Alan's resourcefulness and his determination to get there, we eventually made it. Too bad about the appetisers and bubbly we missed and the salad that had seen better salad days -- and the drenched shoes, socks and jeans -- but at least we made it. Late. By about thirty years. Two old geezers at a table of thirty-somethings from around the world. But hey, we got there. And they did give us an enthusiastic round of applause for making it against all odds.

The best part of the night for me was the rum with Alan once we got back to the comfort of our apartment and shed our wet clothes.

So then to bed. But again the weather had better ideas than to just let us sleep.  In the very early hours of the morning up came the wind. And some. Right outside our apartment there has been some painting/decorating works with loose cables and things and they all started banging and crashing. So sleep evaded us and we must hope for something better tonight (although I have to rise at 4:30 am to get to the airport).

We did rise though, to quite a treat. Here they have a different kind of 'busker'. Couples get dressed up in their best evening wear and perform the Argentine tango, sometimes just in the street, other times in restaurants. Right outside out apartment a couple did just that. 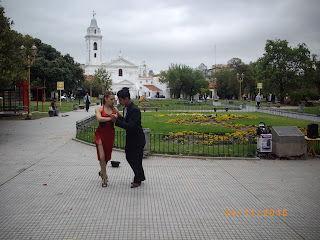 I would have joined in but I didn't have my dancing pumps on at the time.

Buenos Aires is a huge city and in the few days we've been here it has been impossible to see it all but Alan selected a couple of interesting areas for our last glimpse today.

The first was San Telmo and Plaza Dorrego where artisans sell their wares in the square and in small shops in a kind of arcade.  There is some interesting architecture here so we strolled around the streets for a while.  In doing so we found, as is often the case in South America, a beautiful church tucked away in a narrow street. 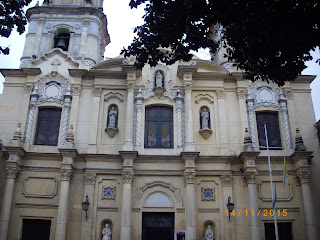 After that, it was off to another interesting part of the city, La Boca. Early settlers here came from Italy, mainly Genoa and there is a strong Italian influence even today.  Cobbled streets, colourfully painted houses, restaurants featuring tango dancers all blend to make this a delight of sight and sound. 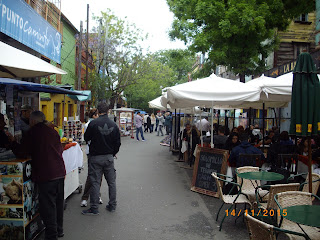 When I think back to our first couple of days in Montevideo and what we've done since then, it feels like it was two months ago, not two weeks that we started out.  It has been a fantastic ride. But it's just about over now. Days Thirteen and Fourteen will be swallowed up with our long journeys home.