Yesterday was a long 'un.  Poor Alan had to drive for about five hours. It would have been four but for the fact we took a couple of wrong turns and spent far too much time on dirt roads, literally in the middle of nowhere. Below is part of the reason we drove for far too long. Let's call it a Bridge Too Far. We both jumped up and down on it and it didn't collapse into the river below but when we got back into the car cold feet took over and we decided to give it a miss. 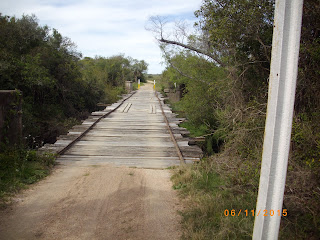 But eventually we found an oasis of sorts. Yes, another winery.  I'll tell you a bit about it and before you think I've suddenly become more proficient at writing, I'm quoting a lot of this from Alan's guide. In fact, let's put it in italics just to be sure:

Argentina's richest man, hydrocarbons tycoon Alejandro Bulgheroni, has bought a huge swathe of land immediately west of Pueblo Garzon with amazingly ambitious plans for producing wine and olive oil. Uruguay's wine industry has been trapped in its boutique niche, with no producer big enough to sell to foreign supermarkets rather than specialist retailers - but the situation is set to change.  Bodega Garzon's output should be both good enough and plentiful enough to break out when its huge new winery starts production in 2014.

It cost around $USM35 and is built to the highest levels of sustainability, with grass roofs, natural light and wind power; with 60ha of Tannat, Albarino and Petit Manseng plus smaller quantities of Gamaret, Marsellan, Calvadoc, Cabernet Franc, Merlot, Petit Verdot, Pinot Noir, Pinot Gris, Viognier and Sauvignon Blanc, and Alberto Antonini (father of the Super-Tuscan blend) as consultant, there's huge potential.

You get the picture.

Speaking of pictures here's one of Alan at the winery: 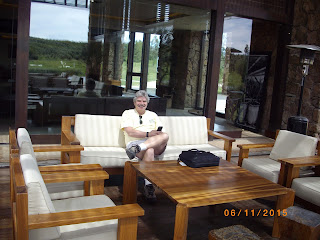 In addition to memories I came away with a bottle of beautiful Pinot Grigio. And if I'm lucky, Alan will tear himself away from his bed and all the technology to make lunch and I'll have another glass of it.

Oh, and by the way, there's plenty of wildlife in the winery grounds.  You think you've seen a rat. THIS is a rat: 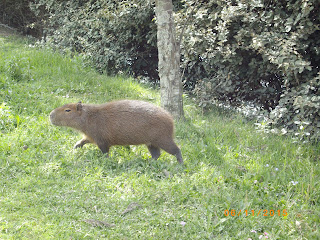 Now, you'll recall the accommodation we had in Montevideo: a suite at the Radisson, twelfth floor, great view, maid service, exquisite breakfast and so on. So I knew that Alan would have pulled off something equally miraculous for Punta del Diablo.

But THIS is where we ended up: 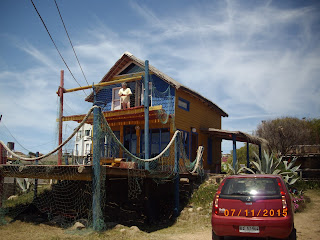 Well, at least it's two storey, with running water, a flushing toilet (though you do have to run outside and refill the tank every now and then) AND a resident dog thrown in free of charge. 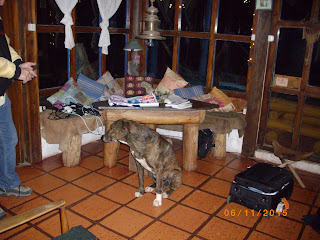 We've been taking it easy today. Mainly because there's nothing much more to do in Punta del Diablo but take it easy.  But it is kinda idyllic. We're looking straight down onto the beach and we have the sound of the waves which is always a big plus for me. In the distance we can see Brazil, just 45 minutes driving time from here. It's great. Really.